Before my Dad got sick and died he took me to a place way out on the prairie. The lights of the towns were little strings on the edge of the flatness. We lay on our backs in the snow. The sky was so full of stars it stretched your mind. "Do you hear that?" my Dad said. And I could. There was a singing happening beneath those stars and the earth between us. "That is the only song that matters," he said. "You must say 'yes' to that song Frieda, the rest is sleep."

Excerpt from Song of This Place, written by Joy Coghill


What fascinates me in my life is what I call the space between. What acting is to me is not what you do as character. It's what happening between us and the audience. That's the magic space, the true theatrical space that doesn't belong in any other medium - that is what cannot happen in film.

Without her help, we probably wouldn't all be here now. She was the one who got called in at the last minute all the time. With this career, you don't know when work is coming up, so you can't plan. Suddenly it's there and you've just got to go.


On her marriage, her family and what a difference their support has made to her in her career:

So much of my strength comes from my family, I must put some strength back in. Right now I am tired. This [a year off with her family] will be a kind of beginning of a renewal, a maturing of ideas, as I investigate things I haven't had time to do.

Night and day, light and dark but it's not just the partner, it's the children. You have to have their support [in order to do it].

I know I thought I could. I thought marriage could mean enough to give [acting] up... But then I realized I couldn't. There was a part of me that was awake - as many people long to be awake - only when I was working. If you have learned to do something such as a craft, there is a part of you that is only really alive when you are doing it. It literally feels like a part of you coming alive then - a part that is dormant when you are doing other things. You can't let your talent become the most important thing. It is like walking a tightrope. But it s not you who falls off - it is the others who suffer. I can honestly say that I haven't found the balance there.


On receiving the Order of Canada:

It's a very great honour, not just to me but to theatre in general. You don't accomplish anything by yourself, ever. To get a play on involves hundreds of people... and each person is equally important.


On her energy and ability to get things done:

The energy is God-given. I was born with a kind of energy; you can't just sit so you've got to put it somewhere. You put it where your understanding is of where it will do the most good.

She was still alive when I started playing her but I needed to find my own Margaret because acting is not mimicry. That won't last. One needs a sense of personal truth. I found "my" Margaret when I realized there was a whole generation of women like her - a phenomenal breed who were pioneers, they carried their families through the Depression. My portrayal of Margaret is not so much of a type, but of a truth.


On doing Lear as a woman:

We [artists] are also intimate with human fear. Our performing lives are driven by the gasoline of fear but also we know that there is a point where fear can be overwhelming and kill the work. In dealing with overwhelming fear, I have found that the thought of "The Parade" is fascinating. When going on to play Sarah Bernhardt in Murrell's Memoir or [Jane] Heyman's production of Shakespeare's Lear, it helped me to know that I was joining a parade. The energy, the power, the joy of it! I could pick up energy from those that went before and leave energy for those that come after. We all know the palpable energy in the spaces of the old stages that still have their "ghosts".

I'm in despair about the country right now. I know that theatre is of the first importance to the health of my country. I know that artists are the visionaries and the prophets and that they're all dying of starvation. And I know that I have to sustain myself in a society that couldn't care less whether we are eliminated next week. 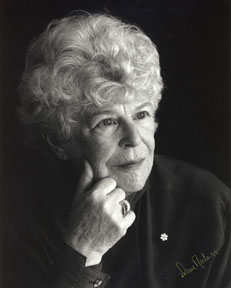 I think I wanted to be a pioneer. I wanted the challenge of being in on the beginning of something. There's a whole generation, my generation, that died of nervous breakdowns and alcohol because they were superb actors in a theatre that hadn't quite been established yet.

I think it's a calling. I think creative work of any kind is something to do with that part of yourself... I think acting is not what you do or what I do, it's what happens between us. The quality of our acting depends on the quality of what is passing between us. The truth of it. The meeting of the two souls if you will.

I think all you can teach actors is to trust the inner voice, to trust it no matter what anybody else says. Even when the critic says no or someone comes back and says "what was wrong with you tonight?" You know that for you it might only be a moment but something happened that was a step for you. I think that's the most important thing that everybody has. If a voice is destroyed by a teacher, I think that teacher should be drowned.

One of the things that fascinated me was where did [Emily Carr], who was totally alone, get the courage for that last great burst of art that seemed to come out of the earth itself?


Excerpt from the play Song of This Place, written by Joy Coghill