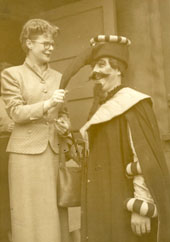 It all began with $140. Seven people contributed $20 each to make history: Jessie Richardson, John Thorne, Sydney Risk, Joy Coghill, Myra Benson, Peter Mannering and Russ Williamson. Dan McDonald was also an active participant but had no money to contribute.

Joy had been steered towards children's theatre by Charlotte Chorpenning while she studied for her Masters at Goodman Theatre in Chicago, and she wanted to continue that work. On her return to Canada she joined Sydney Risk's Everyman Theatre where she focused on theatre for children.

In 1952 Joy returned to Goodman to teach. While there her "great guide and inspiration", Dorothy Somerset, wrote to Joy and offered the use of the (old) Frederic Wood Theatre at the University of British Columbia. Holiday Theatre was born and their first office home was 3480 Dunbar Street in Vancouver.

"We called it Holiday Theatre because 'Everyday becomes a holiday when you go to a play'," Joy Coghill recalled. "We had to get a license to operate a business out of that tiny space. I remember City Hall had no category that fit a Theatre business, let alone the first theatre for children... It was here on Dunbar that experiments at U.B.C. (Dorothy Somerset) and productions at the Everyman Theatre (Sydney Risk) culminated and professional youth theatre began in earnest."

"Myra [Benson] was a tough business manager and the reason Holiday Theatre survived financially was entirely her doing but you had to account for every penny and if you didn't have the receipt you didn't get the money," Joy said. "We're talking about dimes really... We did a show for $150 or something."

They paid themselves $35 a week on tour and $10 a show in town with the director receiving $200. Although they packed the Freddie Wood Theatre, audiences of 125 could not sustain them financially, so during their first year, Holiday Theatre began the touring productions they would become famous for. They constantly re-wrote plays to reflect "the changing child" and more than half the plays they presented were original, a fact of pride for Joy Coghill. They were among the first to commission new plays by Canadian writers.

By the mid-1960's Holiday Theatre audiences had grown to 112,000 annually and their reputation was high. Through "the efforts of John Nicholls and friends we acquired a building on Marine Drive" near to the Metro Theatre where they now performed. "[It was] purchased for us knowing that the Oak Street Bridge would go through the property." This proved to be very valuable when Holiday Theatre later joined forces with the Playhouse Theatre. 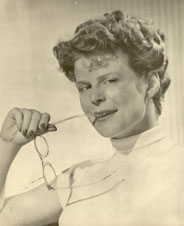 Joy, in 1953
while at Holiday Theatre

Holiday Theatre presented plays to Vancouver audiences and added to their drama classes while Holiday Playhouse expanded the touring operation. Holiday Theatre also brought one more valuable commodity to the Playhouse Theatre when it joined forces with them - the building on Marine Drive.

"In '67 Holiday Theatre brought a dowry to the Playhouse," Joy said. "[It] used the sale of that building to purchase a building for offices and shops on Beatty St. They sold that and moved to 7th Avenue. This property was mortgaged in a bad year and finally lost altogether."

When Joy left in 1969 another amalgamation took place with Holiday Theatre and Holiday Playhouse being absorbed into the Playhouse Theatre. The new organization operated until 1974. They continued the touring programme but they ceased doing the youth plays and classes. By that time Joy Coghill no longer had any association with the organization.