In 1971, the CBC transferred Jack Thorne to Montreal, to produce drama, and Joy was appointed the first female Artistic Director, English Acting Section, of the National Theatre School.

After two years, in the post, Joy began to pursue acting full time. She appeared in films (her first one with David Cronenberg), on television and in theatre productions across Canada, for which she received rave reviews and numerous awards. Amongst her many principal appearances in film and on television, she is best-known for her roles in the critically-acclaimed Da Vinci's Inquest and Ma, a CBC adaptation of her previous stage appearances as Margaret "Ma" Murray, the outspoken journalist and British Columbia's first female newspaper publisher. Her theatre work included co-producing Noye's Fludde (Britten) with Niki Goldschmidt, her prize-winning performances as Sarah Bernhardt in John Murrell's Memoir, Puck in the opera of A Midsummer Night's Dream (Britten) and Miss Helen in The Road to Mecca. 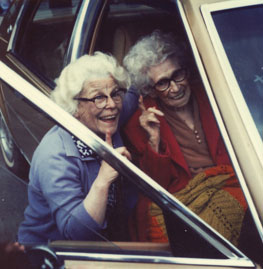 Joy with the real Ma Murray

As a published playwright in both Canada and Israel, she is proud of her historical role in bringing Canadian playwrights into the light of the world stage.

In 1987, Joy wrote and produced Song of This Place based on the life of Emily Carr. Joy created The Alzheimer Project in 1998, one of the productions of Western Gold Theatre, which she founded in 1994 to showcase senior talent and to fight ageism in the marketplace. The staging of A Midsummer Night's Dream, with actors all over 60, became the subject of a CBC documentary The Courage to Dream. Joy was also the company's Artistic Director until 1999. The Artistic Director in 2008 is Colleen Winton.

The importance of her work was recognized by her country when she was awarded the Order of Canada, in 1991. Among her many awards are the Governor General's Performing Arts Award, Jessie awards for best actress and significant artistic achievement, the Confederation Medal, the Canadian Silver Jubilee Medal, the Gascon Thomas Award, and the Herbert Whittaker Critics' Association Award for Outstanding Contribution to Canadian Theatre.

Upon retiring, Joy threw her energy into what many would consider her most ambitious project. She collaborated with friend and colleague director Jane Heyman, on the creation of a building to house and support aging people in the performing arts... people who had dedicated their lives to cultural fabric of Canada, with little monetary gain, and no pension plan. Many were surviving on less than half the income of the average Canadian senior.

They founded PAL Vancouver in 2001 and, after five years of fundraising and planning, the Performing Arts Lodge (PAL), Vancouver, opened the doors to its 111 rental units in May 2006. Among the first residents were Joy Coghill and Jack Thorne. The building, of course, includes a 100-seat theatre.

"I've tried to live my life as passionately as possible. I am passionate about Canada and believed that, having done my best with what I've been given, theatre was the most important way to serve it."

Return to first page of Biography...