On A Passionate Journey 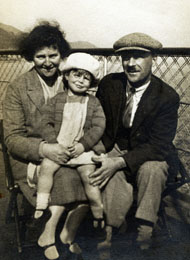 Joy with her Parents
Growing up as an only child, Joy Coghill was used to initiating her own theatre. She lived in her imagination, singing, dancing and acting all the parts. She grew up in a time when a career in theatre was unlikely, when mothers didn't work outside the home. And yet, she would forge a career as an accomplished actor, director and teacher; she would raise a family through the demands of an unorthodox life, create Canada's first professional children's and seniors' theatre companies, and be recognized by her country for her pioneering work in helping to forge a country's vibrant, cultural identity.

Born on May 13, 1926 in Findlater, Saskatchewan to Reverend George Coghill and Dorothy (Pollard) Coghill, the family moved to Scotland where a milder climate would be kinder to her ailing father. After he died in the first year of World War II (1939), Joy and her mother returned to Canada, settling in Vancouver where Joy attended Kitsilano High School. She took also elocution lessons, and eventually earned an Associate of Trinity College, London, which qualified her to teach. This proved valuable in 1944 when she entered the University of British Columbia (UBC) to study Social Work. Money that had been put aside by her father for her education was tied up in red tape and Joy worked her way through university.

Joy had first appeared on stage at the age of 15, in a Vancouver Little Theatre production of Bunty Pulls the Strings, in 1941. At UBC, she became deeply involved with the U.B.C. Players Club and The Summer School of the Theatre, acting, directing and teaching under the inspirational guidance of drama teacher and early mentor Dr. Dorothy Somerset. Then, her life changed when she discovered that it actually was possible to get a Masters Degree in Theatre. At the time, no advanced courses in theatre were available in Canada.

She applied to the Goodman Theatre at The Art Institute of Chicago, thinking that, if life in theatre wasn't the passionate living she envisioned she could always fall back on teaching. All the appropriate papers were ready but she had no idea how she was going to pay for it. It was at this point the red tape cleared and money put aside by her father suddenly became available and Joy was off to Chicago.

Just before leaving however, Joy met John Thorne, who was coincidentally studying to be a television producer at Northwestern University, just outside Chicago. While there, the relationship blossomed. They were married in 1955. They would have three children - Debra, Gordon and David - and John would become a successful television producer for the Canadian Broadcasting Corporation.

In Chicago, Joy was particularly inspired by the charismatic Charlotte B. Chorpenning who, at close to 80, was the vibrant, passionate creator of The Goodman Children's Theatre. Joy became Chorpenning's assistant, graduating in 1950 with a Master of Fine Arts degree.

Joy returned to Vancouver to teach at UBC, directed and acted at Sydney Risk's Everyman Theatre, and spent a summer with the International Players in Kingston, Ontario. Finally, she returned to Chicago, to teach and direct at Goodman Theatre. While there, she received a letter from Dr. Somerset inviting her to create Canada's first professional theatre for children.

Holiday Theatre first found a home in 1953 at the Frederic Wood Theatre, on the campus of UBC but success and demand would push them out into touring the province and result in the company owning their own building and creating a thriving school for children and youth. Holiday would present over one hundred plays most of them original Canadian works. In 1967 Holiday Theatre became associated with the Vancouver Playhouse Theatre Co. when Joy became its Artistic Director.

The first female Artistic Director of the Playhouse, Joy inherited an audience, a staff and a commitment to the new Canadian play, from Malcolm Black. Indeed theatre history was about to be made with a groundbreaking new play first suggested by Black. On her first day, novelist George Ryga brought in an outline for a play titled The Ecstasy of Rita Jo. Joy and Associate Director Charlie Evans, decided it must be produced in Canada's centennial year, 1967. The play, directed by George Bloomfield, received rave reviews and was one of the first to address issues relating to Aboriginal people. Through the vision of colleague David Haber, Rita Jo would play at the opening of the National Arts Centre in 1969 - the only Canadian work at the opening Festival that was attended by Prime Minister Pierre Elliot Trudeau and the Premiers of all the Provinces.